*waves back into the blogging world*
This is a scheduled post. By the time this becomes live in the blogosphere, I’m unfortunately still on blog break. There’s this nasty thing called work priorities *sniffs* 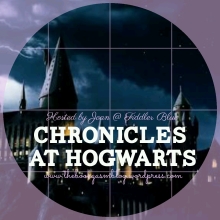 This piece follows from where The Story Mash Up left off last week. For those scratching their heads, The Story Mash Up is a collaborative story writing activity involving bloggers (namely Ash, Eve, Michelle, Joan, Vineeth, Kaycee, and me).who take turns into writing their pieces in accordance to what the previous wrote about. And since the magic still lives on, the theme is *tadaa* Harry Potter!
Disclaimer: Harry Potter is an original story authored by J.K. Rowling. Some characters and references present on this story are originally ours while some are credits to her.

The events of the night played out in a haste. One second ago, upper class students from other houses were strangers to Yokito. The next, he was huddled with them planning to thwart a plot against an alleged werewolf.

“That’s a very good question. What are they going to do to me?”

All four heads turned to the voice that boomed across the door. Yokito didn’t know who the girl was until someone muttered something like “Indira Marshall”, the acclaimed werewolf. What are the odds?

“Why are you out of bed? Fancy some detention, don’t we?” tiny but surprisingly high and mighty prefect called Min Hye said.

“Funny I should ask you the same thing.” Indira retorted.

“Look, we all broke the stupid strolling-past-the-curfew code here so might as well keep this little trip a hush-hush.” Yokito said, surprised with the relatively confident tone on his voice. “I’m going to bed now. Night everyone!” He got up to leave, something he should have done twenty minutes ago.

A hand went up to his shoulder coercing him to sit back down. “Not so fast. Everybody in this room’s involved now. Nobody leaves.” Aislin said. Her voice demanded deference. This girl wouldn’t take no from anyone, Yokito thought.

“Indira, someone’s plotting against you….”

Yokito barely listened. This isn’t the kind of trouble he signed up for. In the first place, he didn’t want to be on this school. Hell, he would trade anything to ride the Hogwarts Express bound to London and fly back to Japan.

The poor boy just sat there the entire time, anxious someone’s listening to them. He heard a faint sound of footsteps and motion from outside. Or it could just be attributed to paranoia. The girls were huddled together like a football team attempting to come up with a strategic plan.

“Fine. I’m a werewolf. I don’t understand how this is a big deal!” Indira exclaimed, one eyebrow raised.

“Duh! How is it not a big deal?” Percy replied, immediately clapping her hands to her mouth as soon as the words came out.

“Whatever” Indira rolled her eyes out at her. “How do I even know you guys are not making things up against Emily?”

“Quit it!” Aislin snapped. There went her loose tongue flaring up again.

“Indira, look. We’re not friends or anything but what we’re doing here, breaking the rules and all for your precious sake, are something beyond our obligations. So thank you for appreciating.” She flipped her hair creating the perfect drama.

“You’re forgetting about the other threat. I would never mistaken that voice for anyone else. Can’t believe Ashley Lawson’s a part of this.” Min Hye exclaimed matter-of-factly. Turned out, that familiar voice belonged to their fellow fifth year. Yokito’s having a hard time catching up.

“That mudblood twit!” Percy blurted out indignantly. “I’m sensing this is their retribution against Slytherin. Your house has been giving disparaging remarks on them for centuries!”

“What do you mean?” Indira gave her a quizzical look.

“Well, Alexander Fleamont from your house was sent home when Professor Nott discovered Muggle drugs from his trunk the first day of classes. Rumors had it that a Muggle-born girl from Hufflepuff was spotted sneaking on the train when all the students got off.” Percy narrated.

The girls sprang into a gossip party. What Yokito heard wasn’t of interest to him but all the same, gave him the creep. Back in his old school, the worst prank was just putting a lizard on someone’s locker. This was silly compared to what he just heard about a student who jinxed a freshman’s broomstick and made him fall off an 18-foot altitude.

“We have to report this to the headmistress. First thing tomorrow, we’ll march up to her room and spill everything, okay? For now, let’s call it a day.” Min Hye concluded.

Everyone got up to their feet and went to their respective dormitories. Yokito had never had a long day as this. The stretch from where they were at to the Fat Lady portrait that guarded the Gryffindor dormitory seemed like the longest mile.

“What are you two doing at the wee hours of the night? Breaking the rules, are we?” the Fat Lady yawned with absolute apathy.

Two? Did Yokito hear her right? He’s the only Gryffindor in the group. Everyone else trod different flights of staircases heading to their own rooms. The Fat Lady must be seeing doubles. He turned to see if the portrait’s making a joke out of him. Alas, it wasn’t. Yokito saw a girl with long blond wavy hair, her wand pointed at his chest. The hair on his nape stood on end.

“Yup, I’m the mudblood twit your sneaky friends were bad-mouthing” said the girl, amusement played on her thin lips. “And you kid, are coming with me.”

What will Ashley do to Yokito? Is this really about Muggle-borns taking vengeance against the Slytherins?
Find out what happens next on The Chronicle of Hogwarts. Ash @ Teabears & Co will be on the keyboard next!