An Abundance of Katherines by John Green

The entire world’s been immensely raving about The Fault in our Stars… but not me. Okay, strangle me if you think that would make me see the point, but my decision stands firm. I didn’t, by any chance, get smitten by Gus and Hazel Grace’s love story. I swore to never try any John Green again after that but some twists of fate aka free books lead me to read An Abundance of Katherines.

SYNOPSIS (from Goodreads): Katherine V thought boys were gross. Katherine X just wanted to be friends. Katherine XVIII dumped him in an e-mail. K–19 broke his heart. When it comes to relationships, Colin Singleton’s type happens to be girls named Katherine. And when it comes to girls named Katherine, Colin is always getting dumped. Nineteen times, to be exact. On a road trip miles from home, this anagram-happy, washed-up child prodigy has ten thousand dollars in his pocket, a bloodthirsty feral hog on his trail, and an overweight, Judge Judy-loving best friend riding shotgun–but no Katherines. Colin is on a mission to prove The Theorem of Underlying Katherine Predictability, which he hopes will predict the future of any relationship, avenge Dumpees everywhere, and finally win him the girl. Love, friendship, and a dead Austro-Hungarian archduke add up to surprising and heart-changing conclusions in this ingeniously layered comic novel about reinventing oneself.

I can’t perfectly describe my stand on this book. I like it but not much. It’s okay, but just okay.

To be honest, I really thought I was quite unfair to John Green when I resolved to never ever set foot in his story fortresses again. Boy, was I wrong. I never thought I would like it.. in some ways. An Abundance of Katherines won the prestigious Michael L. Printz honor and it was for a reason it did. It is a typical boy-meets-girl kind of story ending in what I’d like to coin, a cliche. So what’s so glorious about this novella with hardly any originality? The writing style. Yes, John Green nailed it! He writes simple but divine. His choice of words were so accurate that it created an image so vivid it’s like watching in HD. Also, I must say John Green’s quite a master of hilarity and a  smartypants in teen speak. How old is this guy, by the way? 16?

Prior to writing this review, I’ve read a couple of some from Goodreads and those who didn’t appreciate the book almost all said in chorus that it’s because of the protagonist. I beg to differ though. Collin Singleton is a child prodigy [possessing high IQ but is basically different from a genius] who got dumped by 19 girls all bearing the name Katherine. While he was an obnoxious, narcissistic teenager who focused only on getting his Eureka moment by making his formula of who will dump aka Dumper and be dumped aka Dumpee work, I kinda like his character. He pulled off the very definition of a sexy dork. He sort of reminded me of Sheldon Cooper from The Big Bang Theory. There’s something appealing about overly intelligent people.It’s cute when Colin realizes he’s babbling about totally uninteresting stuff and apologizes for it; like someone emerging out of innocence.

The plot was another excellent element of the book. It started off with a scene where Collin got dumped by her latest Katherine which led him to go on a road trip with his friend Hassan for some unwinding. They ended up in a town called Gutshot where they got a summer job interviewing the townsfolk and lived in a pink mansion with a girl named Lindsey. It wasn’t fast-paced but not idle either. It’s a perfect companion if you’re having your afternoon tea ritual or taking a nap in your front porch.

My anticipation throughout the reading adventure can be described in a prodigy’s tongue as a positive linear graph then slopping to a sharp negative on the conclusion. Hence, a drop to just three stars in my rating. You could literally read the words “That’s it?!” written on my face after reading the book. It’s probably just me but I really think the ending had a lot of deficits.

What downright exasperated me more on reading this was Collin’s quest to formulate a theorem that could identify one’s potential of being a Dumpee and a Dumper in a relationship. I know some brilliant minds who create problems out of the most nonsense stuff but not like this. Not everything can be explained by graphs and formula, not especially about human relationships, for crying out loud! Half the time I spent reading about this I totally felt it was a waste of trees spent on some futile mission to explain the theory of who will call the break up.

But anyhow, there’s one theme in the book that I liked a lot because I can totally relate to it. Collin wanted to matter a lot in the world. His friends did too. At some points in our life, let’s admit we are/were once a Collin too. We are/were so idealistic that we thought this surge of will and spirit residing in our young souls and body could change the world. Every person, low key or not, wanted recognition with that even in the slightest form. Absence of such coupled with the natural ill-fated instances in our life make some of us believe otherwise. For that, I would like to commend John Green for this piece. It’s not the best there is but he deserves to be recognized. After all, not everyone can make a novel. 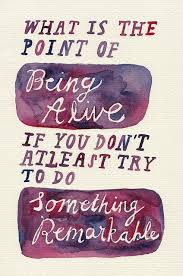