Game of Thrones – On Watching and Reading It 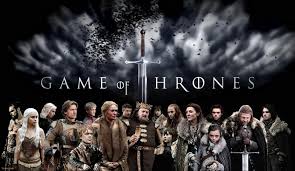 Not book stuff but faintly book stuff. So I’ve finally succumbed to the demand of almost 90 percent of people in my social circle to watch this celebrated TV show of the century. (At this very moment, while typing this sentence, the opening theme rings in my head over and over. Like this is some kind of war I’m going through. Dan-dan-Dararandan..)

Game of Thrones is a fantasy drama series following the lives of kings and queens, lords and ladies, commoners, and paranormal beings of Westeros. Noble Houses coming from different lands across the seven kingdoms fight valiantly for the right to the iron throne, the highest power.

It took me five years and many dead prominent characters to start watching Game of Thrones. I am a huge believer that if a book doesn’t strike as appealing, chances are the TV adaptation doesn’t as well. Also, I thought there would be no room left for me to be emotionally tugged. Spoilers everywhere. Being compelled to listen to dozens of my friends and a sister who couldn’t stop blabbering about it is as good as learning the story by heart. What’s more, my Facebook and Instagram feeds are always dropping the bombs about the latest deaths! They stole away what could have been a life-changing juncture for me.

I hopped in with the GOT junkie leagues just a couple of weeks ago. I was watching the first episode and the next thing I knew, I finished the entire first season in one sitting! I tell you, it was such a struggle to unhitch my eyes from the screen, to prevent myself from clicking the “next” button for the second season!

I laid out the reasons why I liked Game of Thrones:

In connection to that, I’m seeking advice to those who have already read the book.  My sister owns a collection of all the book installments even the fancy The World of Ice and Fire. I was quite hesitant to try it actually. The book features are a typical pet peeve for me – too small letters, very thick books, sentence-crammed pages, etc.

Is the book better than the TV series?